With the onset of improved technology and understanding of remediation processes, sites of increasing complexity and difficulty are now coming into the realm of possibility as viable remediation sites. Yet, these increasingly complex sites require smarter and more up-to-date remediation strategies, often in the form of combined remedy approaches. Several of these complex sites have now been successfully remediated through innovative remedial design in which multiple in situ remediation technologies are integrated spatially and(or) temporally in order to optimize treatment, increase overall project efficacy, and minimize project costs. These combined approaches may take the form of combining multiple in situ thermal remediation (ISTR) technologies or combining ISTR with other in situ remediation technologies such as in situ bioremediation (ISB) or in situ chemical oxidation (ISCO) in order to take advantage of thermally enhanced reactions and remediation mechanisms. 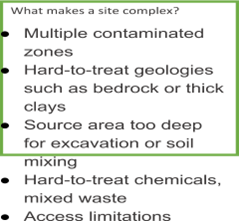 WHAT IS A COMPLEX SITE?

The environmental industry has reached a stage of maturity where the majority of the sites that have yet to achieve regulatory closure can be defined as “complex.” Various remedies have been implemented at these sites, with limited success for many reasons. As an industry, we have learned that there is no “silver bullet” remedy to address complex sites; often a combination of remedies is required to achieve remediation goals. 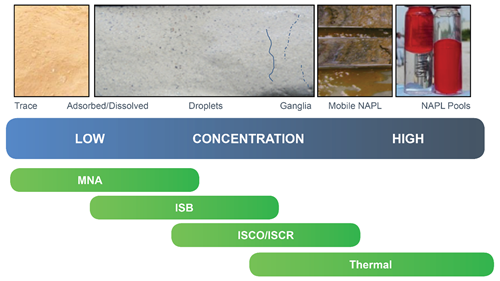 Often, one ISTR technology is clearly a superior fit. However, on many sites, choosing between technologies can be a close call and in some cases, site conditions or project goals dictate that one ISTR technology alone simply won’t get the job done. By not limiting an ISTR solution to a singular technology, it is possible to exploit the technical advantages of multiple different ISTR technologies in order to generate creative combined ISTR system designs that offer effective solutions to the more complex sites. In today’s marketplace, the three main ISTR technologies are Thermal Conduction Heating (TCH), Electrical Resistance Heating (ERH), and Steam Enhanced Extraction (SEE), while combined thermal remedies come in a variety of combinations of these technologies, including:

Both TCH and ERH can be successfully combined with SEE to effectively treat sites which exhibit a low porosity, low hydraulic conductivity interval (TCH or ERH) as well as a highly transmissive aquifer featuring groundwater flow rates from 1-ft/day to hundreds of ft/day. On sites where portions of the treatment zone are best accessed by angled or horizontal heating elements, TCH heaters can be easily placed on angles or horizontally, and can easily be combined with ERH electrodes which require sub-surface installation.

By addressing site and project complexities using the correct combination of thermal remediation technologies it is possible to effectively generate a workable solution to otherwise difficult project features. These unique combined thermal remedies will allow you to efficiently achieve your project goals in a shorter time frame and lower overall cost. 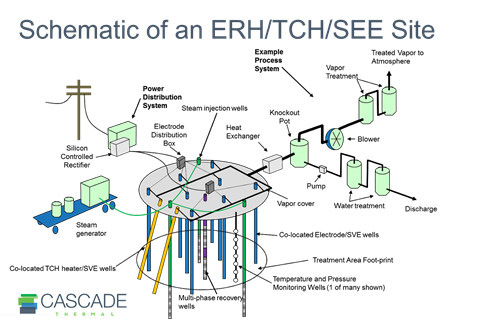 COMBINING THERMAL WITH OTHER IN SITU REMEDIATION TECHNOLOGIES

Often, the best solution for a site is to combine technologies spatially and(or) temporally. Picking the best-suited technology for each zone or at varying stages in the project when it is more cost-efficient than using one technology past its sweet-spot.

During traditional applications of ISTR, temperatures of 100°C or higher are reached throughout a treatment volume. While these high temperatures would seemingly limit biodegradation and sterilize microbial populations, surmounting evidence over the past few decades suggests that not only do ISTR projects not “sterilize” microbial populations from a site, many contaminant degrading populations, survive, recolonize and flourish at ISTR Sites as temperatures begin to cool to more modest conditions. Additionally, more moderate heating (i.e. 35°C) can effectively accelerate dissolution/desorption rates and enhances the naturally occurring biotic degradation occurring at a site.

For chlorinated solvents, many studies indicate that optimal temperatures for both maximum bacteria population growth as well as biodegradation rates peak at around 35 to 40°C. Up to approximately 40°C, dechlorination rates are expected to double with every 10°C increase in subsurface temperature. Due to:

It is possible to take advantage of the residual heat energy in the subsurface of an ISTR project, to enhance bioremediation efforts. These combined ISTR-ISB projects take on three (3) archetypal forms:

Exposing a solution of sodium persulfate to elevated temperatures causes enhanced activation. The rate of persulfate activation increases with temperature. Thermal activation is thought to proceed where heat decomposes persulfate into two sulfate radicals which are responsible for the in situ destruction of HVOC contaminants in groundwater and sorbed to the soil matrix.

During ISTR, contaminant removal rates increase until a peak rate is achieved. This peak rate is defined by the energy requirements for boiling and vaporization of groundwater and the given COCs present in the treatment volume. After the peak mass removal rate has been achieved, removal rates often decrease along a first-order (exponential) decay curve until reaching an asymptotic lower limit. Historic data shows that during pre-asymptote operations, the average energy requirements are approximately 427 (+ 157) kWh/lb of COCs removed. Conversely, during post asymptote operations, average energy requirements are approximately 3,914 (+ 1,741) kWh/lb of contaminant mass removed, representing a more than 900% increase in energy demand per unit of contaminant mass removed. Continuing ERH system operations once the asymptote recovery rate has been reached is neither economically nor environmentally responsible, as continued mass removal is negligible, energy consumption per unit mass removed rates become astronomically high, and the cost per unit mass removed increases significantly.

Turning off power to an ISTR project once these conditions have been reached, and implementing an injection strategy in the treatment area that will take advantage of thermal activation while offering the potential for project cost savings.

TerraTherm, a Cascade Company is the only thermal provider that has direct experience in the evaluation, design, and implementation of all three major in situ thermal remediation (ISTR) technologies. As well as offers in-house capabilities to provide thermally enhanced ISB and ISCO components to a remediation project.