Which Way the Vapor Blows: California’s Best Practices for Vapor Intrusion Screening (and Why You Should Care)

States across the country have various vapor intrusion regulations and guidance, but California has always been the most aggressive in regulating and managing the risks of contaminant vapor inhalation. These regulations typically constitute the next wave of best practices and indicate the way legislation and regulations in other states will be going. That’s why it’s important for consultants nationwide to understand California’s new Supplemental Vapor Intrusion Guidance (SVIG). In this blog post, we’ll explain the goals of the guidance and cover the primary implications for environmental consultants and projects in the state of California. 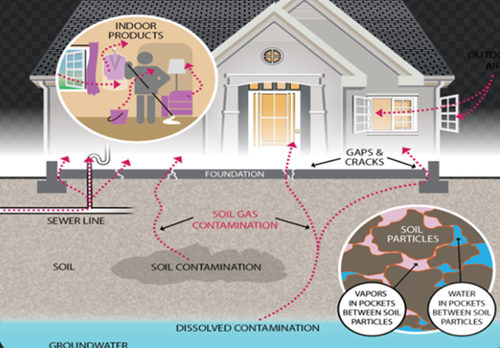 WHAT IS THE NEW VAPOR INTRUSION GUIDANCE?

In February, the CalEPA Vapor Intrusion Workgroup published the draft Supplemental Vapor Intrusion Guidance (SVIG) for public comment. DTSC and Water Board will be accepting written comments to this draft document until noon on April 30, 2020.

This Supplemental Guidance provides information and recommendations on the following topics:

WHAT ARE THE PRIMARY IMPLICATIONS OF THE SUPPLEMENTAL VAPOR INTRUSION GUIDANCE?

Although the California guidance has not yet been finalized, it’s worth understanding the goals the CalEPA is attempting to achieve regarding soil vapor intrusion—and how they plan to go about it. The guidance, regulations and legislation in California is typically a good predictor of what environmental consultants in the rest of the country will be seeing in several years, and it is never too early to begin planning for those changes.

If you are in California and anticipate the new Supplemental Vapor Intrusion Guidance will impact your projects, we can help.

If you aren’t in California but still need assistance with vapor intrusion on your site, let us know.

Limited Access Projects: How to Do More With Less

How to Select Liquid & Solids Amendments and Pumping & Delivery System...

The Basics of Planning a Successful In Situ Injection Project