The tetrachloroethene (PCE) source zone at a site in Endicott, New York had caused a dissolved PCE plume. This plume was commingled with a petroleum hydrocarbon plume from an upgradient source of fuel oil. The plume required a system for hydraulic containment, using extraction wells located about 360 m downgradient of the source. The source area was remediated using in situ thermal desorption (ISTD). 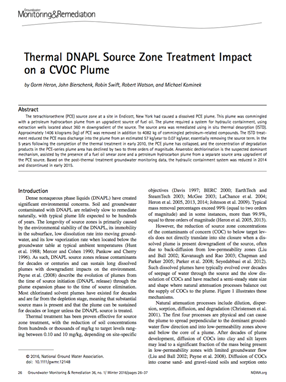 Why In Situ Thermal Remediation Should be Considered for Treatment of ...
10/05/2021

Thermal Treatment: A Reliable Option for your Bedrock Source Zone

What You Need to Know About Thermal Remediation for MGP Sites

Heat It Up: How High Temp Thermal Tackles Recalcitrant Chemicals