Why You Should Consider High Temperature Thermal Conductive Heating

What do coal tar, PAHs, PCBs, pesticides, dioxins, PFAS, heavy hydrocarbons, and mercury all have in common? These chemical mixtures are hard to treat using traditional remediation methods. Their chemical properties make them stable even at relatively high temperatures. Innovations in thermal remediation technologies have made it possible to achieve the required soil temperatures to successful treat these problematic contaminants.

The TCH technology was originally invented and developed back in the late 1980s to address and treat PCBs, PAHs, and other chemicals requiring high temperature treatment. Later in the early 2000s, engineers at TerraTherm modified TCH to target VOCs and other chemicals at temperatures at and below the boiling point of water. While thermal treatment at temperatures up to 100°C represents most of the thermal treatments completed to date, there are sites and chemical mixtures where high temperature TCH is the only successful thermal solution. 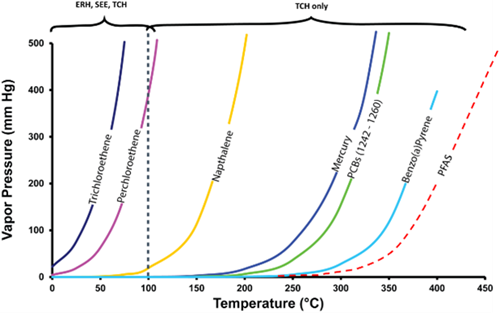 What Are the Removal Mechanisms of High Temperature TCH?

Steam distillation: On the way to the higher treatment temperatures, the soil passes the boiling point of water, and steam is generated. Steam is a more effective evaporator of heavy compounds than air due to steam’s lower molecular weight. The steam helps carry the contaminants out of the soil.

Boiling: Increasing the temperature above the boiling point of the contaminants leads to boiling and therefore rapid contaminant removal. At temperatures applied in a high temperature TCH application, most organic compounds vaporize due to simple boiling.

Chemical reactions: At the highest temperatures, pyrolysis and oxidation become important destruction mechanisms. The byproducts of these mechanisms are typically more volatile than the original chemicals, and therefore easier to remove.

Overall, the increased temperature adds several removal benefits for the hard-to-treat chemicals, that are not achieved during a traditional thermal remedy targeting the boiling point of water or lower.

Is High Temperature TCH Conducted In Situ or Ex Situ?

High temperature thermal projects can be completed either in situ or ex-situ. The key for an in situ application is operating only in the vadose zone. If operating below the water table, full control of the groundwater present is critical to maintain temperature. A continuous flow of groundwater into the high temperature area will buffer the temperature at the boiling point and prevent dry-out archival of the higher temperatures required. Dewatering is an option for controlling the water but can be difficult due to the increased gradient created in the process. If the dewatering system fails during thermal remediation, inflowing water may quench the treatment area and set back the remedy for several months.

In-pile thermal desorption (IPTD®) is used for ex situ applications. IPTD projects require excavation of the contaminated soils and placement of the soil in a pile. However, many of the typical thermal candidates such as PAHs, PCBs, PFAS and dioxins are often present at the contaminated sites in shallow layers, which may favor excavation and treatment in IPTD anyway. High temperature thermal remediation projects typically operate for seven months to one year, and stringent cleanup goals are achieved quickly, efficiently, and reliably.

Successful implementation of high temperature TCH is complex and experience matters. For 25 years, the engineers and scientists at TerraTherm have perfected the technology for safely heating soils to high temperatures and for extracting and treating the targeted contaminants.

If you are interested in learning more about this technology, we encourage you to join us for next week’s webinar.

If you are unable to make it, register anyway and you will be emailed a link to the recording to watch later. 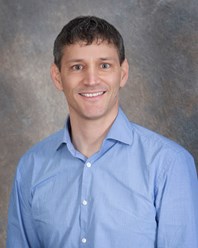 Steffen Griepke is the Technology Director at TerraTherm, a Cascade Company. In this role, he helps clients determine if a thermal remedy would work on their project site and, if so, which thermal technology or combination of technologies would be the most cost-effective. He then leads the design of the remedy and guides its implementation, operation, and continued optimization through project completion.

Steffen’s experience in designing, operating, and using real-time data for optimizing thermal projects makes him an excellent partner for clients with complex sites or recalcitrant compounds.