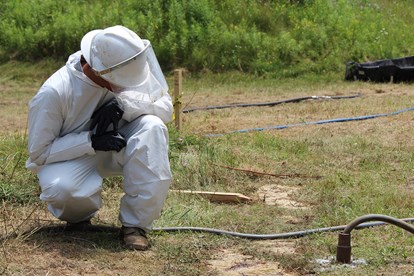 What is In Situ Chemical Oxidation (ISCO)?

In situ chemical oxidation (ISCO) involves the injection of chemicals into the subsurface to oxidize contaminants. The major oxidants used in remediation are hydrogen peroxide, permanganate, persulfate and ozone. In many cases, the chemical oxidants need to begin oxidizing or reducing contaminants. Common activators include iron, caustic, and heat.

In some cases, remedies are combined for greater effect. Common combinations include hydrogen peroxide and persulfate, and persulfate and permanganate.

How does ISCO work?

While some oxidants such as permanganate cause direct oxidation of chlorinated ethenes, radical chemistry is the primary mechanism for most oxidation or reduction of contaminants. Hydroxil and sulfate are common radicals used for oxidation, and superoxide is often used for reduction.

What are common reasons for using ISCO?

ISCO is an especially useful remediation technology for treating source area contaminants at concentrations below DNAPL or LNAPL conditions.

For compounds like 1,4 dioxane, chemical oxidation is the only commercial remedy available (though research is ongoing for bioremediation approaches).

In some cases, ISCO can be used to reduce the overall remediation timeline (vs. a slower bioremediation approach).  However, if the source area has high concentrations of contaminants sorbed to finer grained soils, multiple events over extended time frames will be required to overcome groundwater rebound, which would make the timeframe similar to what you’d expect from a bioremediation solution.

Oxidants like hydrogen peroxide, persulfate and ozone are effective treatment options for solvents and for petroleum contamination in transmissive zones.

In some cases where sites are already aerobic, chemical oxidation is considered the preferred approach over trying to turn anaerobic for bioremediation.

WE WOULD LOVE TO HEAR FROM YOU

Have general inquiries about Cascade and our Services?

Looking for a quote?