A successful pilot test completed by Cascade lead to a full-scale implementation of pneumatic fracturing and proppant injection at a former industrial facility in Carson, California.

The existing soil vapor extraction (SVE) system installed to remove extensive PCE contamination within the unsaturated soils had reached an asymptotic mass removal. The objective of the pneumatic fracturing application was to enhance the extraction rate by increasing the bulk permeability of the treatment zone to achieve additional mass removal. 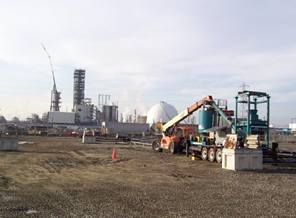 The Droids You're Looking For: The New Remediation Injection Technolog...
ISS/ISCO: What You Need to Know for Project Success

Design Considerations for DPT and Well Injection Manifolding to Optimi...