Last week we posted Part 1 of our Breakdown of the different technologies used for In Situ Bio-enhanced Thermal Remediation. If you’re looking for more info, make sure you download the webinar which provides in-depth details into the various technologies as well as the pros and cons of each.

For now, we’ll continue with the breakdown. This post is part 2 of our webinar breakdown, covering the different combined remedies for In-Situ Bio-enhanced Thermal Remediation.

We will start with the concept of biodegradation, with a brief look into how this concept plays out in chlorinated solvent biodegredation and reductive dechlorination. Next, we will talk about some of the approaches you can take to combine in situ thermal projects with bio applications, and some tools to help make monitoring and planning easier.

There are three general biodegradation processes, all three of which may be found during the ISTR process:

Full degradation of chlorinated solvent plumes often requires all three processes, as the co-metabolism step responsible for the breakdown of vinyl chloride requires an anaerobic step followed by an aerobic step

Aerobic metabolism depends on both the compounds being remediated and the temperature, pH, and salinity of the subsurface. In the absence of oxygen (an anaerobic site), microorganisms often use chlorinated compounds to facilitate respiration via an electron transfer processes.  The most common anaerobic process for degrading chlorinated compounds is the electron transfer process called reductive dechlorination. Hydrogen atoms are sequentially substituted for a chlorine atom in the contaminant molecules.

Variety of halorespiring bacteria are responsible for anaerobic reductive dechlorination:

Desulfurimonas (DSM) – Able to complete dechlorination of PCE and TCE to cis-DCE , typically using acetate as the electron donor in that reaction.

So how does ISTR treatment tie together with the concept of biodegradation?

During traditional applications of ISTR, temperatures of 100°C or higher are reached throughout a treatment volume. And, while these high temperatures would seemingly limit biodegradation and sterilize microbial populations, plenty of evidence suggests that not only do ISTR projects not “sterilize” microbial populations from a site, but more moderate heating (i.e. 35°C) not only accelerates dissolution/desorption but will also enhance biotic degradation. Many populations involved in dechlorination reactions survive, recolonize and flourish at ISTR sites as temperatures begin to cool to more modest conditions.

For petroleum hydrocarbons, BTEX biodegradation has been shown to triple from 10 to 20°C and petroleum hydrocarbon biodegradation rates have been shown to peak between 30 and 40°C. A typical profile of petroleum contamination is a complex mixture of a range of compounds, or functional groups, with a range of chemical and physical properties, and degradability.  Microbial populations of petroleum contaminant degraders are also diverse and variegated.

What Does This Combination Look Like for a Project? 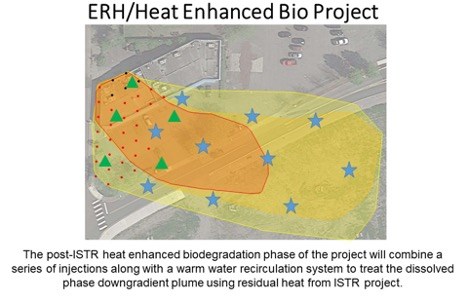 For advantages of each of these approaches, check out the webinar recording.

Having and selecting the approaches to combine biodegredation and ISTR is the first step, closely followed by having the right tools for proper monitoring and planning your project.  When combined with chemical and geochemical groundwater monitoring programs, these analyses really provide the ability to evaluate the potential for biodegradation of multiple contaminants through a number of anaerobic and aerobic metabolic and co(metabolic) pathways. This in turn provides a comprehensive view of contaminant biodegradation that cannot otherwise be gained from individual analyses.  By not just looking at the size and health of a particular microorganismal species but actually simultaneously quantifying specific functional genes responsible for aerobic and anaerobic biodegradation, you are able to gain a much needed view of biodegradation potentials, and anticipated degradation trajectories.

Using molecular biological tools (MBTs) such as QuantArray to monitor and inform an ISTR project, provides a comprehensive picture of contaminant biodegradation, including:

MBTs such as QuantArray permit reliable characterization of the site microbial community in terms of community structure, populations present and their biodegradation potential prior to, during and following ISTR. This provides a direct avenue to:

Proper monitoring using MBTs can evaluate the need for biostimulation following ISTR as well as evaluate the effectiveness of biostimulation during post-heating thermally enhanced biodegradation. When QuantArray results during site characterization, or following ISTR operations, reveal a lack of dechlorinating bacteria, particularly Dehalococcoides, bioaugmentation may be needed. Following bioaugmentation, QuantArray can be used to confirm increases in dechlorinators as well as to monitor their survival at the site.

Whenever there is the possibility of augmenting or improving an ISTR project with some heat enhanced bio component, you should always monitor at various stages including baseline, during, and post ISTR conditions using the suite of MBTs offered by MI.  This enables you to accurately understand and inform what is happening to the bugs living at the site(s), and how to best utilize and augment residual heat from ISTR treatment to maximize the biodegradation potential of those communities of bugs.

We know that was a lot to unpack.  Be sure to check out the recorded webinar for complete details.  If you would like more information on our thermal remediation capabilities, you can contact us or request a quote.