Bioremediation is a crucial component of many remediation plans. In fact, experts forecast the global bioremediation market will reach $186.3 billion by 2023. Here in the U.S., petroleum bioremediation is among the most common in situ treatment remedies for sites contaminated with organic compounds. Understanding how it works can help you to make more informed decisions about its applications and performance. In this blog post, we’ll provide a refresher on the miracle of bioremediation.

Every day, a new article is published about the importance of bacteria to the larger ecosystem. Our personal bacterial microcosm, specifically the bacteria in our gut, plays a major role in regulating a wide variety of biological processes. It’s a symbiotic relationship, and it’s similar to what we seek to establish in the subsurface with bioremediation.

To create that mutually beneficial condition, we intervene to influence the conditions in the subsurface by stimulating microorganisms with nutrients and other chemicals to enable them to destroy contaminants. There are three things we need to consider to do this successfully:

For petroleum contaminants, we can adjust the environmental conditions and/or introduce the right microorganisms. Existing conditions can be enhanced by adding oxygen and nutrients to produce aerobic degradation, or by adding sulfates/nitrates for anerobic degradation, depending on the oxidation reduction potential (ORP) and dissolved oxygen content of groundwater. Injecting nutrients or oxygen does not destroy contaminants directly, but creates an environment that encourages the growth of a healthy population of microorganisms that do the degrading for us.

HOW DOES BIOREMEDIATION WORK?

Bioremediation occurs when microorganisms gain energy by catalyzing reactions that deteriorate chemical bonds, then transfer electrons away from the contaminant in an oxidation-reduction reaction. In simpler terms, bacteria gain energy from the process of breaking down hydrocarbon contaminants in the presence of oxygen. The hydrocarbon is broken down into carbon that is used to multiply and electrons that are used for energy to power the cell.

Petroleum hydrocarbons are a string of carbon and hydrogen atoms in a stable molecule. The petroleum hydrocarbon contaminants we see most often in our industry are fuel oils such as gasoline and diesel, or their main chemical components: benzene, toluene, ethylbenzene, and xylenes (BTEX). The process of destroying organic compounds with the aid of oxygen is called aerobic respiration, and interestingly, the byproducts are the same byproducts of the human respiration process: carbon dioxide and water. Another byproduct is a healthy community of microorganisms. 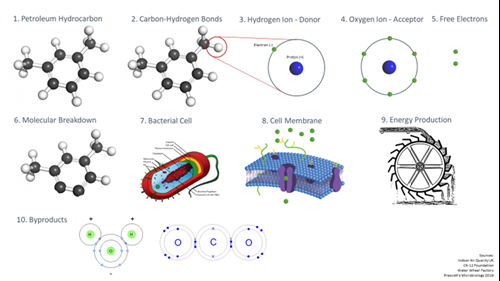 Let’s take a closer look at the aerobic respiration process, step by step.

The second type of bioremediation is anaerobic degradation and it’s more complicated, but here we’ll provide a general overview. 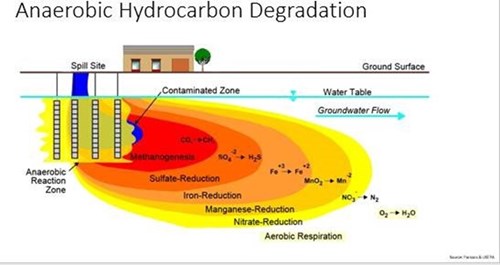 In the subsurface environment, there is more than just oxygen and bacteria. When the oxygen in the system is used up and the environment is anaerobic, other electron acceptors step in to provide energy for the bacteria. This occurs in a stepwise fashion, following the natural law of path of least resistance, easiest to most difficult, to free up electrons—or those of higher oxidation potential first, then lower oxidation potential. For example, in nitrate reduction the microbe is able to break nitrate (NO3) to provide an oxygen atom and convert the molecule to nitrite (NO2). Later in the process, semi-unstable metals are used in another complex process to free up an oxygen atom that will degrade the hydrocarbon and continue to advance the metabolic process.

This figure is a little misleading because it makes it seem like this process goes from near-source to downgradient, but actually it’s the opposite. The image depicts a late-stage spill, and the source area was where aerobic biodegradation occurred until biological oxygen demand was higher than the dissolved oxygen available—then nitrate, then so on until CO2 is the only thing left and creates a much slower breakdown process.

WHAT SUBSTANCES ARE INJECTED FOR BIOREMEDIATION?

As explained earlier, the amendments that are chosen for each site depend on the contaminant and the geological and chemical conditions. However, there are some common substances injected during bioremediation:

HOW DO WE KNOW IF BIOREMEDIATION IS WORKING?

We use a variety of field and analytical indicators, such as…

WHAT ARE OTHER BIOREMEDIATION APPROACHES THAT CAN BE USED?

Although the methods described in this blog post are the most common, there are many bioremediation approaches available:

Bioremediation is a fascinating example of how we can team up with nature to remove contaminants ranging from chlorinated solvents to petroleum hydrocarbons.

If you’d like more information about how to use bioremediation on an upcoming project, you can check out a case study, reach out to me or request a quote.