As the name suggests, the MIHPT is a combination of other tools developed separately. Brought together, these multiple data streams create a robust collaborative data set project managers rely upon for strategic site management decisions. The tool combines a Membrane Interface Probe (MIP), Hydraulic Profiling Tool (HPT), and a diode capable of measuring electrical conductivity (EC). The tool itself is advanced into the subsurface via direct push drilling technology. So, if you can get a probe to your target depth, you can get an MIHPT there too.

The MIP portion of the system provides a continuous vertical log of the relative level of impact of volatile organic compounds. This is a screening-level tool providing semi-quantitative data. It operates by moving a stream of carrier gas (nitrogen) down to the probe tip and looping back up to ground surface. The gas passes by a semi-permeable membrane at the bottom of the loop. A heater block below the membrane heats up the subsurface before the membrane passes by. If there are volatile organic compounds (VOCs) present, they will volatilize and pass through the membrane and into the carrier gas, which then brings them back to a set of detectors at the surface. The measurements from these detectors are presented in real time and charted against the depth below ground surface. There are four detectors on most MIHPT units:

This is the tool with which most project managers are familiar. It is essentially the same PID technology everyone brings on site in a handheld unit to screen soil samples and ambient air. Accordingly, it is subject to many of the same limitations. It detects all VOCs, both petroleum hydrocarbons and chlorinated solvents.

This detector is only able to detect halogenated compounds. It is less sensitive than the ECD and does not exhibit the same bias toward highly chlorinated compounds. Running both the ECD and the XSD together provides great value since the ECD can detect lower concentrations and if it gets saturated by a high concentration, the XSD is there to back it up.

The HPT creates a real time log of the relative formation permeability versus depth as the probe is advanced into the subsurface. It operates by injecting clean water from an above ground reservoir at a constant flow rate through the direct push rods and out into the surrounding soil via an injection port on the side of the probe. Simultaneously, sensors record the flow rate, the back pressure required by the pump to maintain that flow rate, and the current depth of the probe. These measurements are collected by the onboard software. An estimated hydraulic conductivity (K) value is calculated and plotted alongside the other measurements in real time. 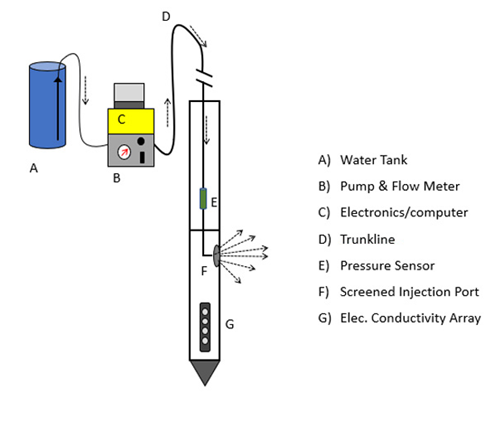 The final piece of the MIHPT is the electrical conductivity (EC) probe. In a general sense, the electrical conductivity of a soil varies with grain size. This correlation is utilized to better understand subsurface conditions based on the EC data. The EC measured in the subsurface varies based on changes in mineralogy, groundwater geochemistry, and contamination. It is important, then, to confirm the accuracy of the EC data for this use by collecting confirmatory soil borings from your site.

BRINGING IT ALL TOGETHER

Combining this continuously logged information about geology, hydrogeology, and contaminant type & distribution into a single subsurface advancement is extremely valuable. In a matter of minutes or hours, you can generate more detailed and comprehensive data than traditional sampling means collect in weeks.

Ready to learn more?  Join me on May 13, 2020 for my Leveraging MIHPT Data for Optimized In Situ Remediation Approach webinar when my colleague Eliot Cooper and I explain in detail how to use this tool – from selection to program design, and then on to data interpretation using Cascade’s “Expert Rules.” The Cascade team has characterized and remediated thousands of sites. We’ve seen these MIHPT data sets put to the test when it comes time spent designing remediation programs. Based on that experience, our Expert Rules streamline your confirmation sampling and remediation design programs.

Avoiding Cross Contamination: What You Need to Know About Drilling and...
04/05/2022

How to Select Liquid & Solids Amendments and Pumping & Delivery System...

How to Design an Efficient HRSC Program Based on Objectives and Data G...

Pre and Post HRSC Optimized Remediation in the Northwest

Project Highlight: Sampling and Vertical Aquifer Profiling for PFAS at...

Project Highlight: Coring and Sampling Along the Waterfront at Battery...